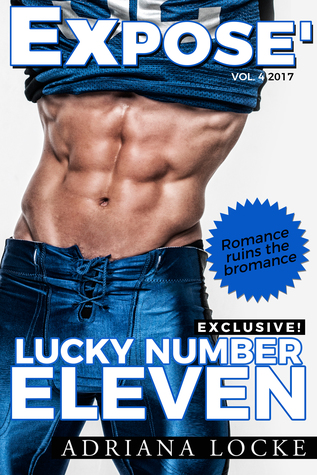 Synopsis:
People say not to believe the things you read in magazines, but you know what? Most things you’ve heard about me are probably true.
I totally banged the reporter in the locker room after the championship game last year.
Those pictures in Expose from last summer? Those were not modified.
I’m also not really six-foot tall. (But let’s keep that between us.)
Now, I know you’re wondering about that last Expose headline—the one about me and my teammate (and ex-best friend) Finn Miller’s sister, Layla James. That one is a little more complicated.
Here’s the thing: I’ve played football my whole life. If there’s one thing I know, it’s how to adjust when the game changes. And if there’s one thing I always do, it’s find a way to win.
Granted, the stakes are higher. The playbook has changed. There’s more on the line than (another) MVP title. But guess what hasn’t changed? Me. I’m still Branch “Lucky” Best and I’m not about to fumble this one.
Grab a seat and a subscription to Expose. I’m about to make some headlines. (Again.)

I didn’t know what to expect while reading this book but I wasn’t at all disappointed.

Branch and Layla have off the charts chemistry. I loved their banter and how Layla was able to get Branch to open up and let some of his guard down. She helped him to get back the person he used to be and that was really cool to watch. I really liked Layla’s character. She handled her situation pretty well and proved that she would be able to stand on her own if that’s what needed to be done. She was a really strong, independent character.

Branch and Layla are the center of this book but I’ve got to gush for a minute about Poppy. I think she’s going down as my favorite female character by Adriana Locke ever. When I think about everything that a best friend should be, that is what Poppy was for Layla. She was just absolutely amazing. I loved her sass, spunk, and humor – I laughed out loud a lot during her scenes. I hope Poppy and Finn get a book of their own some day.

Another thing I loved is the little glimpses we got from characters from other books by Adriana. That was really fun and exciting to see. I squealed a little each time I saw a cameo pop up. I also enjoyed the little hints at what is to come. I’m super excited!

One thought on “Review – Lucky Number Eleven by Adriana Locke”