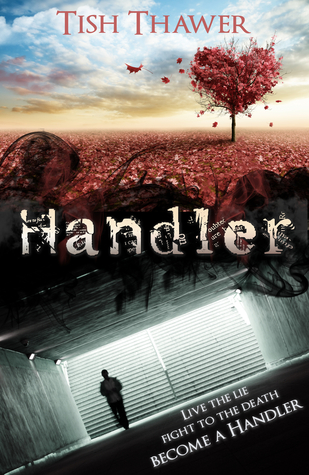 Synopsis:
Our world was perfect––until we broke the law: Don’t go out at night.

Utopian by day, dystopian by night; this is the world I recently discovered. I now struggle with the fact that our whole society has been based on a lie. There’s only one way to change it––conquer the darkness we’ve all been raised to fear.

Live the lie; fight to the death; become a Handler. It’s the only way.
My Review:
3 out of 5 stars

I didn’t know what to expect with this book, but wow. I have so many thoughts running through my head right now, it’s hard to process all of it.

Handler is centered around a post apocalyptic world, but we soon find out that everything is not as it seems. I have mixed feelings about the main character Cole. There are times when he comes across as a little weak, but then there are other times when he shows that he can be strong – in the end, he did what he needed to do, so major props for that. It wasn’t an easy decision to make at all.

The mystery in this story is written very well. I spent a lot of this book confused, but it wasn’t in a bad way. There is a lot going on, with a lot of secrets, so it was hard to gauge who you could trust and who was telling the truth. As things started to come out, it made more sense. There were a few instances where my mouth dropped open in shock because something happened that completely took me by surprise.

My only real complaint is that, to me, it felt like the story wasn’t finished and there was more to tell. Just when everything was starting to come out and fit together, the story was over. I don’t know if there is going to be a second book or not, but I was left with a lot of questions about what was going to happen next.

All in all this was a really engaging, mysterious book that is sure to take you for a ride!
Book Links:
Amazon
Barnes & Noble
Kobo
iBooks