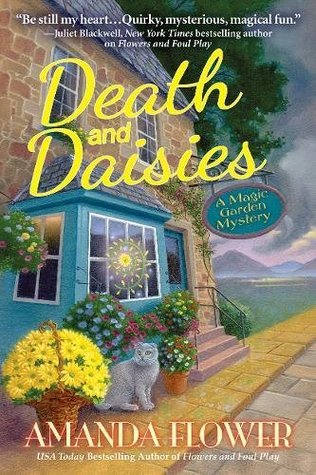 Synopsis
Florist Fiona Knox left behind her gloomy life for a magical garden in Scotland, but a murder on her shop’s opening day spells doom.

Fiona Knox thought she was pulling her life back together when she inherited her godfather’s cottage in Duncreigan, Scotland—complete with a magical walled garden. But the erstwhile Tennessee flower shop owner promptly found herself puddle boot-deep in danger when she found a dead body among the glimmering blossoms. One police investigation later (made a trifle less unpleasant by the presence of handsome Chief Inspector Neil Craig), and Fiona’s life is getting back on a steady, though bewitched, track. Her sister Isla has just moved in with her, and the grand opening of her new spellbound venture, the Climbing Rose Flower Shop in Aberdeenshire, is imminent.

But dark, ensorcelled clouds are gathering to douse Fiona’s newly sunny outlook. First, imperious parish minister Quaid MacCullen makes it undeniably clear that he would be happy to send Fiona back to Tennessee. Then, a horrific lightning storm, rife with terribly omen, threatens to tear apart the elderly cottage and sends Fi and Isla cowering under their beds. The storm passes, but then, Fi is called away from the Climbing Rose’s opening soiree when Kipling, the tiny village’s weak-kneed volunteer police chief, finds a dead body on the beach.

The body proves difficult to identify, but Kipling is certain it’s that of the parish minister. Which makes Fiona, MacCullen’s new nemesis, a suspect. And what’s worse, Isla has seemed bewitched as of late…did she do something unspeakable to protect her sister? The last thing Fiona wanted to do was play detective again. But now, the rosy future she’d envisioned is going to seed, and if she and Craig can’t clear her name, her idyllic life will wilt away in Death and Daisies, national bestselling author Amanda Flower’s second enchanting Magic Garden mystery.

I enjoyed catching up with Fiona to see where she was after the events of the previous book. I was glad to see that her sister Isla was staying with her for the summer (or maybe even longer) so we got to learn more about her as well.

There were parts of this book where the story started to drag and I could feel myself losing interest. The mystery kept me reading though. There were several different suspects to choose from. I kept going back and forth between who I thought the killer was. The killer ended up being someone I suspected, so the reveal wasn’t a huge surprise, but the suspense leading up to the reveal and being thrown off track at the last minute made it interesting.

I still wish that the magical garden played a bigger role in the book. We didn’t see much from it in this book either but I’m hoping that will change in the next book. The romance building between Fiona and the Chief Inspector is becoming a bigger part of the story now, but thankfully it didn’t take away too much from the mystery. I really like the Chief and think he and Fiona would be good together. The information Fiona learned about herself left me with my mouth hanging open. I wasn’t expecting that at all. I hope we get to find out how the conversation goes that she needs to have with her mother. It would be interesting to see how that plays out.

*I received a copy of this book in exchange for an honest review.

2 thoughts on “Review – Death and Daisies by Amanda Flower”