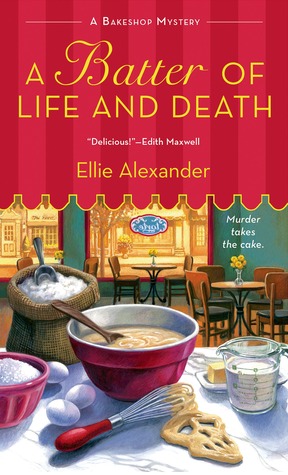 It’s autumn in Ashland, Oregon-’tis the season for a spiced hot apple cider with a serving (or two) of Torte’s famous peach cobbler. It’s also the perfect time for Jules Capshaw to promote her family’s beloved bake shop by competing in The Pastry Channel’s reality show, Take the Cake. The prize is $25,000. But as Jules quickly learns, some people would kill for that kind of dough. Literally.

Then, just as Jules dusts off her Bavarian Chocolate Cake recipe and cinches up her apron, the corpse of a fellow contestant is discovered-death by buttercream. What began as a fun, tasteful televised adventure has morphed into something of a true-crime detective show for Jules and everybody else on set. Who could have killed Chef Marco, and why? Can Jules sift out the killer before someone else gets burned?

I buddy read this book with a new friend of mine over on Instagram. We had a lot of fun reading this book and discussing it together. She was even able to chat with the author to ask for her dream cast for the characters if this series were to ever become a TV show. How cool is that?! 🙂

But anyway, I really enjoyed this book. I loved catching up with the residents of Torte that I came to love during the first book in this series. Adam, Stephanie, Sterling, Thomas, Jules, and her mother are all great characters and I was so happy to catch up with them all.

The mystery was very well written and there were plenty of suspects to choose from. I was able to narrow down the killer but had the wrong motive. Either way, the reveal gave me chills and I love it when that happens!

I am looking forward to seeing how things will turn out between Jules, Thomas, and Carlos in the next book. I can’t wait to read it!